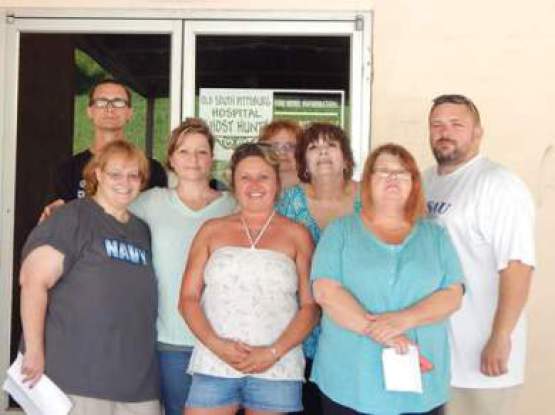 We arrived there and met Stacey Hayes who is the director of the ghost hunts there.  Since we had already been there before, she didn’t show us around and wished us good luck on the investigation.  We all got settled in into our rooms and left to go get something to eat.  After traveling, we investigators get hungry before an investigation.  OHPR always has to find a great restaurant and eat cause you never do know what could happy.

On returning back to OSPH we went over the sections of the hospital that we would investigate.  The first section was the 3rd floor psychiatric ward.  We ventured to the darkness of the 3rd floor where we walked through the Operating Rooms, OB, nursery, and then to the psychiatric ward.  We had prepared a little skit that Michael was a doctor; Tammy Hick was the nurse and Teresa, Robin M, Elsie were the patients of that ward. Michael and Tammy were making rounds going to room to room and knocking on doors telling patients they needed to take their medication.  When we got to Teresa and Robin, Robin was laughing, Teresa was acting nuts.  Michael asked “where is Elsie” they replied “We don’t know”.  Elsie was in another room wanting to scare us.  She did…..  We finished the skit and then went back to Nellie and Irene’s room that is the last room on the left.  We brought Nellie some flowers to go into her room.  An EVP session was done headed by Della Sue.  After listening to the audio we did have some response but could not make out what it was.  After saying good-bye to Nellie and Irene, we proceeded out to the hallway where we sat and asked to for the dark shadow man that is said that walks the hallways.  As we were sitting there we could hear a banging, sounded like drawers shutting or closet doors.  We believed that we had upset them for doing the skit.  We apologized and explained to them that we were just playing a skit and again we said sorry.  The banging ceased.  Our intentions were not to upset them just to have them to interact with us.  We thanked them for letting us come up there and we journeyed to the 2nd floor where our base was at.  Myra had stayed behind because she wasn’t feeling well.  When walking up to the nurse’s station she was sitting there with a surgical mask, white as a ghost and her head was titled to the side.  “OMG she’s dead” but she was asleep.  Our adventures are never boring.

Our investigation contained to Martha’s office.  We believe she was the director of nursing and Michael was the one that insulted her on the first visit back in 2012.  Her tiny office had clutter in it and we just investigated the big office next to hers.  We did the 4 corner experiment and Michael was in the middle asking questions.  He asked if Martha was there and asked if she remembers him from the last time he was there.  In the video you will see him asking the questions and then you see the disturbance.  Martha did remember him.   Tammy H. was touched on the back of her leg and it really did startle her and she wanted to go back where Myra was at the Nurses Station.  No one took her back so she was stuck with us when we went to the basement area where medical records were kept.  Upon entering the room, it was very dark and eerie feeling.  This room had church pews.  We did an EVP session in there and all of us asked different questions.  Some of us were touched or had that feeling that we had others in there besides us.  Della Sue and Tammy H got the most response back when they asked their questions.  Interesting, some spirits will respond to certain investigator and not to others.  We closed our EVP session out and returned back to base.

We relaxed before moving on to investigate to the area of the nursing home was.  We did not stay long in that area because it was around 3am and everyone was getting tired.  We didn’t feel anything or sense anything.  That area was very calm.

Everyone retired to the sleeping area.  The next morning everyone said that they had the best sleep they ever had. Interesting?

We again went back to Martha’s office and Michael went into her small office and using the Ghost Radio, his name was said 3 times.  Tammy H asked if he was a bad employee and the answer came back YES.  We guess why is because of Michael being a doctor in the skit and not giving respect to the patients.  We never do provoke but we can assume that we did provoke them and did not mean to do that.